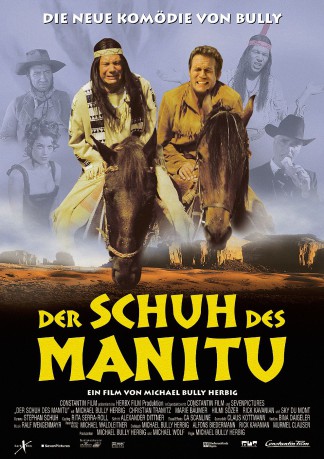 Handlung: Abahachi, Chief of the Apache Indians, and his blood brother Ranger maintain peace and justice in the Wild West. One day, Abahachi needs to take up a credit from the Shoshone Indians to finance his tribe's new saloon. Unfortunately Santa Maria, who sold the saloon, betrays Abahachi, takes the money and leaves. Soon, the Shoshones are on the warpath to get their money back, and Abahachi is forced to organize it quickly. Luckily, he, his twin brother Winnetouch, beautiful dancer Uschi and the Greek Dimitri each own a quarter of a treasure map that leads them to 'the shoe of Manitu'. There, Santa Maria already awaits them to take their new treasure away as well. But he did not think about the determination of Abahachi's team.